Amir Muhammad has plans to move into Bahasa Malaysia publishing with his new company, Fixi. This is a very exciting development, and it came about like this:

“I am not going to be quoted as saying that they’re bad or anything, but I just want something slightly different. Because a lot of these books seem to be targeted at young, Malay women – but what about the rest of the population?” asks Amir.

“It can’t be true that all young Malay women have all the same taste either,” he adds.
He knows of some women writers who told him that they’d tried to pitch a certain idea to a publishing company only to be told that they want only love stories.

“Some even have strict guidelines like ‘the bad guy must not win’ – it’s a market caution thing,” says Amir.

As he had previously read local author Brian Gomez’s thriller Devil Space (he calls it the “best Malaysian novel I’ve ever read”), he wondered, “Wouldn’t it be exciting if we had more books like this, but in Malay where it can reach more people?” 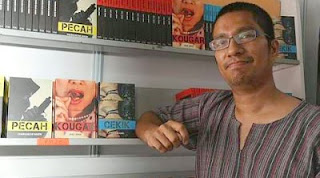 Posted by bibliobibuli at 11:44 pm

i had read some of the tittle published by Fixi. and they are such great reading materials!

They're different and fresh.
Even my male friends are now starting to pick up this hobby.
Reading.