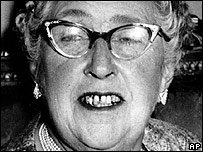 If you find Agatha Christie unputdownable, there could be a medical reason for it.

A neurolinguistic study of her novels by more than scientists at three universities in the UK (and here I resist the tempatation to ask, didn't they have anything better to do?) concluded that Christie's language patterns stimulate higher than usual activity in the brain, the BBC reports. Common phrases used by Christie act as a trigger to raise levels of serotonin and endorphins, the chemical messengers in the brain that induce pleasure and satisfaction.

It seems that perfectly mundance phrases (bordering on the cliched!) such as "can you keep an eye on this", "more or less", "a day or two" and "something like that", coupled with a limited vocabulary that doesn't distract readers from the plot and the use of dashes to create "a faster-paced, unreflective narrative" do the trick.

Okay dear fictionaters, now you have the formula, go run with it!

Posted by bibliobibuli at 10:16 am

that is absolutely the scariest picture of Agatha Christie (or ANY WRITER for that matter) I have ever seen!

"and here I resist the tempatation to ask, didn't they have anything better to do"

But you asked, anyway. :P

eyeris - yes, tis scary - took it from the BBC