A Home for Bookworms 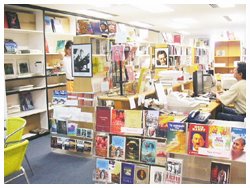 I write so often about Silverfish because Raman is the superhero of the book-centric world: the universe knows no peer! Truly.

The shop was in Sri Hartamas in 1999, moved to more upmarket Bangsar a few months later, and occupies the first floor of a shop-lot on Jalan Telawi Tiga, just a roti canai's twirl from Devi's Corner.

Raman moved into publishing in 2000. Revitalised the Malaysian short story in English, long neglected, with his New Writing series. Gave the wannabe-published something to live for. (Which reminds me, the deadline for the next anthology is end March and even those of you who read this blog from the otherside of Pluto can send in stories.) Published books by other local writers. Is perhaps the best person to send a manuscript too if you need a second opinion, though he won't mince words if he thinks it's rubbish. (I do respect his opinions even if I don't always agree with them.) Runs an editing service.

Hosts events for writers - some very famous names have turned up to read and socialise and eat crisps including Bharati Mukherjee, Shashi Tharoor, Tash Aw and Romesh Gunasekera.

Raman also started up the KL International Literary Festival, something that was badly needed in this corner of the globe. (The next festival is glinting in Mr. Raman's eye even as I type this. I seriously better run and hide.) Now he has started up a literary mag. Is there no end?

As a bookshop, it must be admitted, Silverfish is a little run-down, extremely eccentric. (Like it's owner?)

It might be my bad luck but the shoe-mender from the street below always seems to be changing his clothes on the stairs. (He uses the switch-box as his personal locker.) I've stopped apologising for invading his privacy.

Books there are. A very good section of books by local writers. Some good finds of the more literary kind on the shelves, a mix of new and second-hand copies, though stocks seem low at the moment. When Raman goes on a book-buying spree to India there are some great bargains to be had. And there are always too many temptations on the front counter: I'm so often caught by the "Hey have your read this?" which has heralded not only my happy introduction to Bulgakov, Saramago and Bukowski, but also my gradual fiscal undoing. Phek Chin, Raman's assistant is very clued up about books and whatever they don't have in can usually be ordered very quickly.

Raman's recently partioned off the back room, and now has a space for readings, classes, meetings. He's custodian of a large private library of antiquarian books about this part of the world, and you can sit and read them as long as you like.

The best thing about the shop is that it operates as a meeting place for all kinds of interesting people.Peter Carey and VS Naipaul have browsed the shelves. You might bump into an ambassador or a BBC correspondent or a famous poet or a publishing rep or just another booklover or fictionating scribbler like yourself. Hang out here. Make yourself a cup of tea. Relax.

A woman recently wrote to Raman all the way from Australia to express her concern about the name of the shop. Did Mr. Raman know that Silverfish ate books?

(The one and only silverfish that turned up in Mr. Raman's office one day was treated with the great reverence that befits a mascot.)

Posted by bibliobibuli at 7:50 am

silverfish is another place i spend way too much money at...

VS Naipaul (*arrogant oldie*) was there? I didnt know this. But Sashi Throor...now that's another matter. He of eyebrow-brushing-hair and soft eyes is worth a swoon between The Great Indian Novel.

As with Thor's Skoob, Mr. Raman's Silverfish are the bookshops I have heard but never had the chance to visit...

PS. Wouldn't it be great if one could become a bookshop woner like Thor and Raman, with all the time to read, meet people and talk endlessly about books?

i can never not spend whenever i go to silverfish. hey, you didn't mention that raman has those bookbug cards that give us 5% of books! i take any discount i can get.

oh and i need to check out skoob too! only been there once since it moved to old town. let's you, me and lil mis d organise a trip soon! ;)

chet - that's the word i was looking for! i tell you my english has rosaked completely

jane sunshine - naipaul's visit - dunno when it happened - more rumour than substantiated perhaps ... tharoor - v. handsome for sure ... i have a lovely phot of us two together laughing like hyeanas ...

dreamer idiot - when you come down to kl i'll give you the tour. bookshops owning can be a drag as well 'cos you're tied to your business and for sure won't make money just on book sales

marisa - thanks for reminding me about the book bug discount ...

I'm intrigued by this guy, his literary enterprises, his passion for books and his desire to share.

I'll be requiring your tour guide services too Sharon. ...one year soon anyway. ;-)

ok we can go but i'm only bringing rm5 for food. ergh, last month itself i spent... never mind. it'll be worth it in the long run, dinsy.... we goooooo we goooooo

marisa! why did you not invite me to come along your skoob trip? you'll be getting a earful when we meet at the times warehouse sale!