Phew! That's all I can say. Yesterday's readings at Seksen's place not only happened but came off rather well, I thought, considering that I hadn't had much time to organise the event and hadn't advertised it very widely. (Blogvertising works well!) Many thanks to everyone who passed the word on - there was a good crowd there. 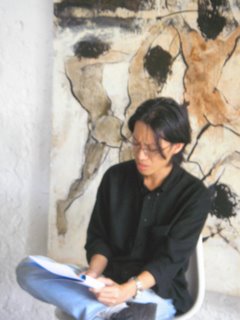 Ted Mahsun had his parents and girlfriend there to support. This was the first reading for this keen and hardworking young writer. I'm so glad he read his story The Ghost in the Garden as I personally like it best of all the pieces of his I've so far read. It's an autobigraphical piece in which you can really hear the voices of the characters. I love the gentle humour of it and sense that it could be developed into a longer piece. (You can read the whole story here.) 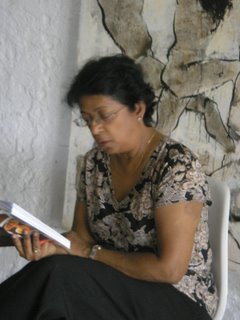 We got two thirds of the writers of Snapshots! Jessie Michael read The Change, one of the stories I like best in the collection because it makes visibly the disadvantaged community in Malacca's Portuguese Settlement. The story tells of one man who does his best to break out of the poverty trap but finds circumstances cruelly against him ... 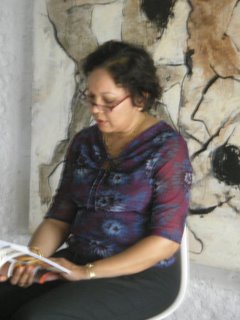 ... while co-writer Saradha Narayanan read her Rani, a moving portrait of an elderly woman. 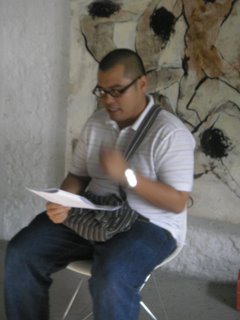 I just loved this young guy, Roy aka Fairul Nizam who entertained the crowd with his poetry. How many miles from the traditional Malay deklamasi puisy has this new generation of poets come, with driving rhythms and street-wise language? Read his poetry here. 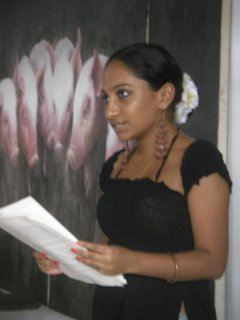 Sharanya reading another extract from her novel. Lyrical and sensual writing. I am really looking forward to the finish work. 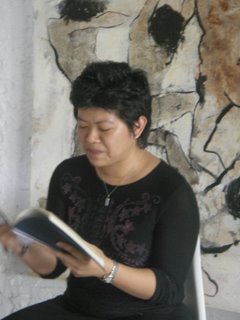 The sporting Jasmine Low stepped in at the last minute to read some of her shorter pieces. She's so relaxed - love the way she relates to the crowd. it's one thing to write the words, another to show ownership of them when read aloud. She read some newly written short pieces including one partly written in Hokkien which I enjoyed very much.

We had a couple of "open mic" readers: Patrick Dominic and a very young guy called kG who positively shone with enthusiasm.

Many thanks to all the brave souls who put their work out there. (It is scary!) Many thanks to the crowd who supported. Many thanks (again) to all who spread the word about the event.

Many thanks to Seksen for allowing us to use this beautiful space.

Many thanks to Budi (?) who helped me to set everything up.

Many thanks to La Bodega for generously supplying the wines.

Before then though, why not go to the readings organised by Jasmine at La Bodega on Wednesday night? It promises to be very good.

Much nicer photos than mine are turning up on different blogs. I love Sharanya's arty set. Leon's are here. Nizam's are here. And here's a very honest account by Vovin.
Posted by bibliobibuli at 10:35 am

Great job, Sharon. What would our lit scene be like without you!?

thanks lydia ... but without folks like bernice to start the ball rolling or ruhayat and raja ahamd and raman to get publishing and folks like you to get writing ...

Thank you for giving me the opportunity to read. It was scaryyy. My stomach was full of butterflies when I first sat on the chair. Hehe.

Hope to see you again in the future.

hi roy! it was fun to have you there. i liked your poems very much. and if you were nervous you didn't look it!

Thanks Sharon for organizing, it was a lovely lovely afternoon.

i loved the atmosphere @ the reading -was a mighty good way to start off my first reading ever.

am looking forward to 23rd's reading very much.

how was the authors' hi-tea on Sunday?

KG - i have only two letters to get right and i can't even manage that! yes, hope to see you again - the atmosphere certainly is very relaxed and friendly.

Hi sharon.
It was indeed a relaxed and friendly gathering that day.
Wished I introduced myself properly though.
I was one of Roy's buddies.

Thanks for this post, Sharon! I am always on the look out for new and interesting fiction and reading your blog always points me to something that is bound to grab my attention.