Texts Across the Causeway 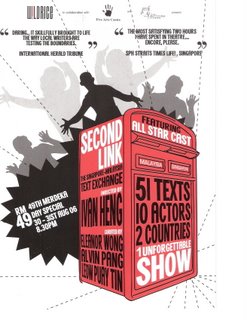 Anyone interested in the literature of Malaysia and Singapore shouldn't miss the forthcoming performance of Second Link by Wild Rice at Actor's Studio, Bangsar.

Let's go back in time a couple of years.

I was helping Mr. Raman to organise the KL Litfest. My job was to coordinate the whole kaboodle, which meant keeping in contact with all the writers and deciding on how to fit everyone into the programme and keep them happy. (Not at all easy!)*

I was in contact with the Singapore contingent through poet Alvin Pang. I slotted the Singaporean poets into the programme and was extremely pleased when Alvin told me that Singapore Arts Council wanted to sponsor an evening event of readings. We put our heads together about the venue and decided we could use the Renaissance ballroom.

Then, just three weeks or so before the Litfest, when the planning was thankfully over (after much sweat and buckets of tears) and the programme had gone to print, Alvin announced that there had been a slight change of plan.

The Singaporean contribution would not simply be readings, but a full blown theatre production directed by none other than the great Krishen Jit. Could we find a theatre for it? I went into full-blown panic mode, phoning round every venue I could think of. All fully booked. Fortunately, the folks at the Singapore High Commission were able to think outside the box and came up with a brilliant alternative: the coolest venue in town, nightclub Zouk.

Now shame on me for doubting that Krishen and his team could come up with the goods in such a short time frame!

The production called Riding the Nice Bus was easily one of the highlights of the entire festival. It was a unique cross-causeway collaboration between the two countries which share so much history, yet seem artistically divided by the causeway. The texts (lifted from plays, fiction and poetry) paid homage to the history of Singaporean writing and were brilliantly chosen by curator Eleanor Wong - the kind of stuff that slaps you right between the eyes. A Malaysian cast performed the whole thing seamlessly. The venue was perfect. (Featured writers and performers listed here.)

Afterwards, I had tears in my eyes as I thanked Krishen (seated at the bar, looking pretty enigmatic) for all his hard work. I could have hugged him, actually, for giving us such an amazing and unlooked for gift for our festival. It was the first and only time I got a chance to talk to this great man, although I had seen him at performances of his plays previously. He passed away suddenly in April 2005.

I wish I had gone down to the Singapore Arts Festival last year (still kicking myself!) because among other things I would like to have seen Riding the Nice Bus performed again - but this time alongside Tikam-tikam: Malaysian Roulette, directed by Singaporean Ivan Heng, featuring Malaysian writings, and performed by a Singaporean cast. (Jerome Kugan gives and excellent account of both festival and performance here.)

The upcoming performance at Actor's Studio merges both productions and brings together more than 50 celebrated texts and ten actors, from both sides of the causeway.

It opens 30th August and runs till 3rd September with tickets at just RM49 on the first two nights. I bought my ticket for 31st because I can't think of a better way to celebrate Merdeka Day!**

* This is what organising the programme for the festival felt like. So many egos to accomodate! The stories I could tell but won't, unless in my autobigraphy published posthumously!
**Though as a citizen of your former colonising power should I be celebrating??
Posted by bibliobibuli at 7:32 am

Speaking of former colonial masters, we have a visitor coming in early September who's related to one of the founders of the company I work in. We're taking him to lunch and he emailed to say he's leaving for a tour of "colonial Malaysia" the day after our lunch. I wonder if that's the name of the tour, or if it's his own phrase! I can't wait to meet him.

You can celebrate and thank God for the fact (as I do and would) that it was the Brits who colonised Malaya and not the Dutch or the French - look at the mess they left behind in their colonies! The Brits left behind great road-, educational- and judicial-systems, long-lasting public amenities and the fact that most of us can read and speak and love the English language. All these most people tend to overlook when they start bashing the colonials...

i think i would rather live like a monkey in a tree rather being colonised by anybody and being aah so civilized and become second rate at anything through colonial mind and eyes...but it's a moot point now...i'm lost... but quite liking it...a kind of 'stockholm syndrome...

Sorry this has nothing to do with your latest blog but I read a book recently that I think you will enjoy titled, CHASING DAYLIGHT, by Gene O’Kelly. He is not a writer but the CEO of the fourth largest accounting firm in the USA. At age fifty-two he was diagnosed with terminal brain cancer and was given ninety days to live.

What’s amazing about this story are the choices he made in these last ninety days. He decided to die with the same excellence he had lived his life. In other words, he wanted the best death possible.

He wrote the first seventy-five percent of the book and his wife finished it for him. I guess I enjoyed it because it showed a different side of death. A side that was not filled with fear and regret. The writing is not the best but the message is so clear that I am recommending it to you.

Maybe you can let me know what you think.

chet - that's a tour i'd love to conduct!

sympozium, greenbottle - two very different views on colonisation! we should debate over a cup of (english) tea one of these days!

anonymous - yes, i do know of chasing daylight by gene o'kelly. remember reading a very good review of it somewhere which made me pick it up in times bookshop. i had a good 'free read' of it, but didn't buy it in the end. i'm glad you are enjoying it. if you would like to write a short review of it, i'd be very happy to post it up.