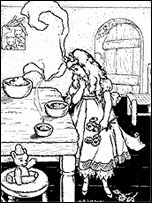 My friend Jaeson Iskandar declared that he is a "goldilocks sort of a reader", meaning that (like Goldilocks in the house of the three bears tasting the porridge, trying the chairs and the beds until she finds the one that's "just right") - he is an extremely fussy reader, taking nibbly little bites at a whole lot of fiction but unwilling to stick for long with any novel that he doesn't really connect with. (Jaes is blessed with single-minded determination in any case.)

I loved the expression - and wish that I were more of a Goldilocks myself - usually I feel honour bound to finish a book once I've begun it. Especially if I've spent good (or even bad!) money on it. It seems like an admission of defeat. Belonging to a book club makes it hard of course, you are so often faced with a book you can't enjoy, but you struggle through it because you know that you're going to be discussing it - and besides everyone stuck it out to read the book that you recommended the previous month but they weren't enamoured by.

Such a book for me was Dennis Lehane's "Mystic River" - an above average thriller with decent characters, some good plotting and vividly realised scenes ... but ... there was something iside me screaming life is just too short to stick with a book that doesn't do a whole lot for you. (I shall probably enjoy the film version though when it's out.)

I set the book free. Liberated it. Turned it into the wild to fend for itself. In other words bookcrossed it and left it for some unknown other who might adopt it and love it more than I do. In other words stuffed it behind a sofa cushion at Darling Muse on Chap Goh Mei at Dax and Yusof's Chinese New Year party. Hope it gets found, and then of course passed on, as is the whole idea with this bookcrossing thing.
Posted by bibliobibuli at 9:49 pm

Hi again Sharon,
Thanks for replying that other time.
I'm just like you in the sense that once I've settled on a book or bought one, then I do feel 'emotionally' honour-bound to finish it. Sometimes though, you may discover a pleasant surprise somewhere along 3/4's way, that gives you an upbeat feeling; that the story wasn't too bad after all.
Or have you discovered that a book you've been meaning to read suddenly didn't fit in with the present mood/inspiration or even desire when you finally got around to its turn?

Yep. It certainly happens that you read the right book at the wrong time. I shouldn't have read Anne Michael's beautiful Fugitive Pieces straight after Captain Corelli's Mandolin when I was still suffering from emotional collapse - didn't do it justice. (must go back to it.) And sometimes I read a book and think this is okay but I would have really loved it when I was younger ...

i have read...and been enlightenned. one particular book is DEFINITELY goin out the window...oh, make that 2! such a pity, i LOVE stephen king but Insomnia REALLY puts me to sleep. *sigh*