My article about following Tash around last Saturday is in the Star today.

Tash Bash a Boost for Fiction

Tash Aw’s return to launch his debut novel was heralded by news of its success abroad. SHARON BAKAR shadows him for a day to see how Malaysians take to the author.

IF recognition here for the achievement of Malaysia novelist Tash Aw has been strangely slow in coming, it suddenly seemed last Saturday that folks just couldn’t get enough of him.

The local-boy-made-good was in town for a series of author appearances at bookshops and his first stop was the Writer’s Circle meeting at MPH Megastore at 1 Utama, Petaling Jaya, Selangor.

The Writer’s Circle is a group for aspiring local authors set up by the bookshop. Previous meetings have focused largely on the practicalities of getting non-fiction books published at home. There is no money to be made in writing fiction, we were told at the first meeting back in January. So it was deliciously ironic that Aw (who won a very lucrative publishing deal and international acclaim for his first novel, The Harmony Silk Factory), was there to speak that day!

He was clearly moved by the welcome from his first Malaysian audience, and shared with us his journey from beginning writer to successful published author.

“I really didn’t know what I was doing when I started out,” he admitted disarmingly. He began by experimenting with the short story form to explore the boundaries of narrative technique. His stories began to grow progressively longer until, in one (about three young people who go off to an Arcadian island), he found the central core of what would later become his novel.

The discussion between Tash Aw and readers at Silverfish Books focussed on exoticism in Malaysian fiction, plot structure and the use of the first-person point of view, among other things.
Aw went on to describe how he initially tried to write in his spare time from his job as a lawyer, but eventually decided to make the big leap of faith and abandon his legal career for a Master’s course in creative writing at the University of East Anglia.

He encouraged the audience to ask questions, “no matter how ridiculous”. These pragmatic folks wanted to know as much as possible about securing an overseas agent.

“That first step into commercial life can be emotionally bruising”, he replied, adding that writers should wait until they were really confident before taking this step. They should also have written a great deal.

Working with a publishing house on job-experience during his spell at UEA showed him how ruthlessly most submitted manuscripts are discarded. Aw acknowledged that luck played a very big part in the selling of his manuscript and that there were many other excellent writers on his course for whom the lucky break had not yet come.

He was refreshingly humble about his success and most encouraging to those who would follow in his footsteps.

“People are interested in reading about Malaysia,” he assured us, adding that publishers in Britain and the United States are looking for material that is well-written, no matter from which part of the world it comes. He cited the recent success of The Kite Runner by Afghan writer Khaled Hosseini as an example.

His main advice to local writers was to read as widely as possible to find out just what was possible in fiction, and to develop the kind of self-criticism needed to be able to assess our own work.

In the afternoon, there was a stint at MPH Mid Valley Megamall, Kuala Lumpur. The “courtyard” area of the bookshop is a cool green oasis with potted palms and a feng shui fountain. A good crowd had turned out to meet Aw, including his uncle and aunt, who had flown in specially from Brunei. Many people paused in their shopping to see what was happening and stayed to listen.

The author’s voice was giving out just a little by this stage, as he retold the story of the writing of Harmony and patiently answered many of the same questions that had been asked in the morning. Then it was time for a signing session and a long line of folks clutching copies of the novel formed in front of him.

After yet another interview with a local paper, it was on to Silverfish Books in Bangsar, KL. Although Aw’s reading there had been hastily arranged, a good crowd of mainly hardcore literati crammed into the tiny shop to enjoy glasses of Chilean wine and chat with the author in a very relaxed dialogue session. 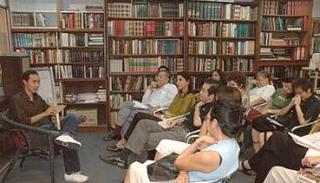 Many had already read the book, so the discussion moved up a notch and there was talk of influences on the work, plot structure, the use of the first-person point of view, and the whole issue of exoticism in Malaysian fiction. Aw read an excerpt from the novel, one calculated to shock with its veiled reference to cannibalism.

If accompanying him around on his various engagements that Saturday has taught me one thing, it is that a novelist clearly needs stamina: not only for the discipline of writing a novel in the first place and seeing it into print, but also to endure the rounds of signings, interviews and book talks which accompany its promotion. It had been a long and exhausting day for Aw, but he left in his wake a buzz of excitement about the future of fiction in Malaysia. 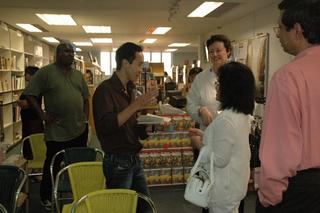 Somewhere in this picture you can see Tash, Raman and yours truly.

My favourite moments are ones I didn't write about in the article:

At I Utama a member of the Book club I belong to got quite upset about the passing of Tiger Tan. "Why did you let Tiger die?" she demanded of the author in a choked voice "all he wanted to do was retire and make a garden and he died."

Poor Tash must have been feeling as much a murderer as Johnny Lim. (If indeeed it was Johnny ...). All he could do was shrug "What can I say? Life's a bitch."

In The Harmony Silk Factory, Tiger Tan is not the only wanna-be gardener, of course. There's Peter Wormwood's eccentric dream of creating an English garden in the tropics. Tash has his own little piece of Malaysia in the garden of his basement flat in London - a banana tree, which he has to wrap in blankets when it snows! (Remember, you read it here first.)

At Midvalley, I was sitting between two gentlemen who were asking most of the questions (most folk being on the shy side). The guy on my left asked Tash why it was a Mat Salleh who reviewed his book, shouldn't it be someone who knew the history of the country rather better. (This guy turned out to be my friend Diane's brother-in-law. In an earlier draft of the article I was going to get my own back on him by describing him as "elderly", but the word limit saved him.)

Anyway, Tash didn't miss a beat. "Sharon Bakar is probably more Malaysian than I am" he said and squashed the guy most satisfyingly. Hadn't realised that Tash knew anything about me (am flattered!) ... and now I feel I have perfect legitimacy for setting out to write the great Malaysian novel myself! (Underway, Mr. Raman, worry not. Am not a lazy silverfish content just to munch on the books of others.)

(P.S. Nizam took a couple of very nice pictures of Tash at I Utama. Check out his blog.) 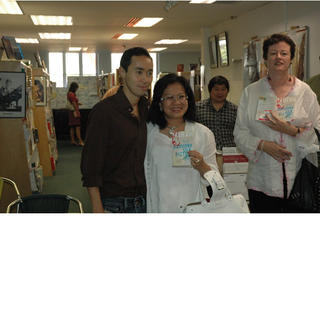 Ohhh, okaylah, I'll pose for just one more.
Posted by bibliobibuli at 10:25 am

Good write up. I wish I were there!

Missed you too, Oon!

Thanks for remembering me, now you know that I was the girl that asked Nash, why he killed Tiger. Sometimes, I know that its' the author's way of not telling one who is the murderer, but, as a curious person, I just like to know who is the murderer, kind of wanting to know what was Nash thinking when he wrote that part. Well, hope to see you for the July reading meeting soon.

"Aw went on to describe how he initially tried to write in his spare time from his job as a lawyer..."

Dear Sharon
Nice blog space. I was searching on Information about Tash Aw's Novel, which I learn about in a recent article published in the Metro and Times (United Kingdom). I'm very impressed that you had the chance to attend his book signing. I would have loved to have been there when the 'elderly' man got him comeupance. I was also very insight to see and allow Tash's quick climb to fame from your blogs as I've only heard about him from reading the tabloids. Well done.