There's little middle-ground between the whoops of joy and the gnashing of teeth. Another Nanowrimo ends and as the dust settles, let's see who's still made the finish line.

Not me. I wimped out after 11,ooo words and the Philippines trip and the couple of deadlines I hadn't reckoned on getting thrown at me. But I'm so happy to see that others have reached their 50,000 words. Organised veterans Chet and Mabel and Erna among them for whom the Nano is a breeze. 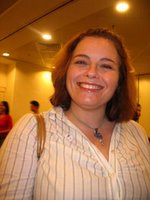 A big hurray for the first timers who climbed that word mountain and proved something very important to themselves about writing. Among them sham, and swifty, and 3rd chimp (even in the midst of packing up all her wordly possessions, three dogs and two cats to go home to the US). 3rd chimp a.k.a Miss Wonderley (pictured left) is a veteran writer and was working on a novel even before this - but she says that she so loved the way this competition forced her to churn out words and the fluency it engendered that she's going to put herself under this kind of pressure from now on.

What's made me especially happy was a phone call and an e-mail I received yesterday. 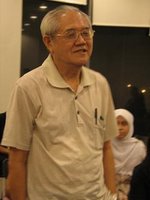 Those who were at the first Nanowrimo meet-up at 1 Utama will remember a charming older gentleman called Huang (right). He contacted me yesterday to ask me how to send in his words - and he'd reached 73,000 and wanted to keep going!!

The phone call was from Gayle Peters who has been a regular at the MPH Writer's Circle Meetings and was thrilled to bits that she'd reached her target and printed off her certificate. Another older competitor, Gayle managed the 50,000 words with just one functioning hand!

Detractors can scoff about the Nanowrimo all they want. The event creates a very special magic, and may that magic spread even further across the face of the earth in 2006.

Now who else won? Anyone know the numbers??

(photos by see ming)
Posted by bibliobibuli at 8:53 am

Email ThisBlogThis!Share to TwitterShare to FacebookShare to Pinterest
Labels: nanowrimo

CLAP CLAP CLAP!!!!! Well done all you Nanowrimo champs! Especially Huang and Gayle!! All of you are such an inspiring lot!

There could either be 38 or 39 winners. We will have to wait until the official winners page comes out after the word count validation. Some Malaysians could be submitting from overseas where there is a time zone difference.

Congratulations to all the winners.

Sharon, I didn't even sign up. What with the festive season and all, I knew I'd wimp out and the guilt would have been too much to handle!

Fuiyoo. Congrats to all the winners. 50k words in one month is no mean feat.

at least that's TWICE as much as I managed the LAST time around... hehe

It's utter crap, though.

Sharon says she take comfort in my 540words.. haha.

Congrats to all winners, so proud of you.

Sim and I think we will end up attempting the Nano in January,HAHA

38 Malaysian winners, and we beat the Singaporeans by 10.

The added joy for me this year was seeing all the first-timers pushing past 50K. I'm glad I finished early so I spent the rest of the month waiting at the finishing line for more Malaysians to come past.

Actually, good thing I finished early, cuz a day or two after that, I got swamped with three work-related events.

congratulations to all - and me??? aaah - i just registered! that's all that i managed to do. Next year! next year! give me a harder prod sharon and i will manage a line, perhaps.

to all those who didn't make it ... don't worry at least we cheered on the rest and helped to create the general ambience ... next year let's try to get over 100 winners!

Hahaha. I'm the one who got press and I didn't finish. ;)

Sorry to burst bubbles but real life again disrupted my NaNoing. Lost my earlier work in a hard disk crash mid-month, my dearest nenek passed away and my long-distance love affair ended, rather tragically. Sigh. Still, though the month's been bad for me, I am happy that so many people made it this year.

39 winners. Our Dana winner did not put Malaysia as her location, so I asked her to, and she did, so now we're 39.

39 - brilliant! chet - did you count in Huang and Gayle? not sure if they set their affiliation to M'sia as they were a bit unsure of how to navigate the website.

erna - so sorry that you had so many problems ... funny how life throws so much at you once you decide to do something like this

Sharon - From your description, I think Huang is winterman05 and right on top of our list for word count. However, he didn't validate his word count, so cannot be included on the official winners' list (but he's still a winner).

As for Gayle, if she validated, she can change her location and thus be added to our list. Can you check with her?

I posted an entry about our winning numbers on my blog and mentioned winterman05, too.

Er, curious to know....what's Nanowrimo?? Never heard of the term or the challenge. :P

chet - thanks ... yes i will call gayle
.. am so upset that huang did not validate his word count because he won't have his cert now ... i think he just got confused about what he was supposed to do even though his son was helping him ... he must have thought that just counting his words was enough ... i offered to go to his house even to make sure he sent everything in okay ... aiyolah

It's a blank cert we get, so he can still have his, if he wants, and we can print it out and get someone with nice handwriting to write his name on it for him.

He's a winner to me, even tho I never met him.

Congratulations to all the "winners", and as "someone" used to say, don't spend the winnings all in one place :)

Is this a yearly things? Ai-yah! I lost an opportunity. I would have loved to try writing a novel. So far I've been writing mostly fanfics. Oh well..

chet - great idea - he's going to be at starbucks this p.m. so hpefully you can talk to him then

sorry i can't be with you guys today - but my love is!

Yes, I met Mr Huang at the TGIO this afternoon. He was very quiet throughout, didn't say much. When I congratulated him, he said he didn't know what happened, he'd updated his word count, so I told him he needed to send in his entire manuscript to be counted, which unfortunately, he didn't do. I didn't get to talk to him about the winner's certificate.

Hey since you've already written it why not try and get it published ? what do you have to lose anyway ?

The man still needs a cert though. It's typical of some people, they like to start things and then not run them well. Too many visionaries, too little admins. Still, virtual certs count just as much.

anon - the certs are there for all who win - just that you must read the instructions properly ...