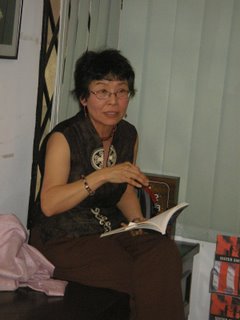 A sizeable crowd of booklovers and old friends packed into Raman's back room yesterday to hear Shirley Lim (pictured left, perching on top of a cupboard!) read from her latest novel Sister Swing and talk about the challenges she faced in writing it.

Lim explained that the novel about the three sisters had grown out of a short story (the now much anthologised Mr Tang's Girls) she had written very much earlier in her writing career. (It won the Asiaweek short story prize.) This time though, the girls kill their father in a completely different (and pretty inventive!) way and carry the burden of guilt throughout the novel. Swing is in fact the nickname given to the middle sister, Swee Wing, who is at times moody and contradictory.

Since Sister Swing is a coming-of-age novel and an important part of growing up is becoming sexual, Lim says that she had to find ways of writing about it without being either too graphic or evasive. I thought she'd struck just the right note in the extract she read from the first chapter ... about the girls examining their private parts in the mirror!

The novel also explores racism in the US (Lim's adopted country) which she sees as not just a question of white vs. other, but also other vs. other (for example, the riots in LA pitched Koreans against blacks). Lim describes herself as an "equal opportunity offender", drawing attention to different permutations of prejudice in the novel, which features also a white supremisicist boyfriend.

Lim described how she tried to overcome the problem of giving the three sisters distinctive voices. She has Swee speaking Manglish in the novel which she says is hardly ever represented on the printed page.

(I interject at this point to say that the linguist in me takes issue with the use of the term Manglish to talk about Malaysian English, and it is an issue that I want to return to in another post - especially with reference to how it affects the choices made by Malaysian writers.)

Lim points out that writers from other language backgrounds have taken pride in using dialect forms. (She gives the examples of Derek Walcott and Jamaica Kincaid who both use West Indian patois to great effect in their writing.) She says that she asked herself why she had been afraid of writing in Malaysian English up to that point. (Although when she did include a passage written in Malaysian English in Joss and Gold, a reviewer wrote "this book could have been better edited"!)

She said she asked herself while writing the book:

If I don't try to write in Malaysian English now, then when? And if I don't do it, then who will?

Is it a little churlish to point out that Kee Thuan Chye has used it to great effect in his plays and in the extract from his novel in progress (which progresses no further sadly) published in New Writing 10?

She struggled with Swee's voice, rewriting many times. Worried that the Malaysian English might alientate American readers and then worried that when she used Standard English she lost the voice, she eventually struck a compromise between the two. (The Silverfish audience yesterday felt it to be rather too watered down.)

Malaysian writers really do have a struggle to position their writing. Just who are they writing for? (Writers in Britain and the US I think cannot even conceive of this struggle, for obvious reasons.) Lim says that she was intitially targeting the Asian American audience, but as she wroe the book it became more and more Malaysian.

The book is published in Singapore by Marshall-Cavendish and in fact there are problems of distribution in the US. How do local publishers break into the overseas market? (This is a problem that bedevils Raman too.) As Lim says, there is "unadulterated prejudice" against non-American, non-British publishers.

In all, it was a lively event and raised some very pertinent issues for local writers. I was happy to get my copy of Sister Swing signed, and meet up with a ton of friends.

(For another take on the event check out Yvonne's blog - and she has lots more pictures.)
Posted by bibliobibuli at 11:16 pm

Hmm, i heard shirley on radio the other day and contemplated going to her readings. But since I'm at Amcorp Mall right now and on my way to Megamall, and she's at the Curve today, I guess I'm not going to see her after all.

Thank goodness for your blog. Look how much I have missed even though I was physically present!

By the way, since US bookstores do not stock books by non-American and non-british publishers, wouldn't that handicap readers there, depriving them of foreign literature?

Shirley Lim...What a pity. She's Professor of English at University of California, Santa Barbara, specialising in Asian American lietrature (an authoritaive critic in the field) and Creative Writing. I would have love to meet her, discuss some critical issuew and probably ask her about the possibility of pursuing a PhD in the States.

As for her writing...I guess she couldn't help but 'pander' to the market she's writing to... What's more, her geographical and cultural dislocation as an Asian American has led her to stand in a fluid and ambivalent out/insider position that can only at best resolve itself through such artistic sacrifices and compromises.

Sexual awakening is also rather interesting...as a site of cultural and gender contestations, negotating the different identities and affiliations of being Asian, American and a girl/woman... and ultimately in finding and locating the self.

Other vs Other...whoaa...that I haven't really heard of yet, but how pertinent it is.

Sharon, thanks for a very informative and thought provoking post. I don't feel so bad for having missed it cos you got it down here.

Re Manglish resulting in a reviewer commenting on the book as being shoddily edited : I wonder if other writers get this type of review due to their usage of other patois, say, West Indian? I guess it's because American and British folks aren't familiar with Manglish.

I'll be swinging by the bookshop to get Swing Sister.

I attended her book talk at Mid Valley the other day and I have a question: Do Malaysians really speak like that? I mean, when Shirley read the part where she writes Manglish, I couldn't help but think that's not how we speak at all. :P Manglish as I perceive it here is how we include the -lahs and -wans. But when she read it, it's "she no like that". Isn't that broken English and not Manglish? :P

other vs other?...check out spike Lee's darkly comic 1989 movie "do the right thing" , arguably one of his best films and which touched on the korean vs black racism...and what a coincidence again...in my most recent nonsensical post "jambo bwana" i wrote this:...And another unpleasant fact of human behavior is that we are all racists…fortunately most of us are reasonable enough to be able to mask it most of the time…but in the bigger scheme of things whatever we do…racist undertones are never far from the surface…and territoriality and racism when mixed together gives explosive results…

and 'manglish'?...some of the local radio ads have the most hilarious and great manglish...somehow manglish falls flat in the written format...

"But when she read it, it's "she no like that". Isn't that broken English and not Manglish? :P"

If that's her version of Manglish, no wonder a reviewer commented about the book being shoddily edited.

Correct me if I'm wrong but "She no like that" in Manglish would be "She not like that one."

hi marita - sorry you missed her

yvonne - so now you know why i was scribbling! need to make sense of some of the issues ... mainly for my own sake

don't think shirley has a blog ... or even a website of her own

dreamer idiot - yes, sorry for you too being so far away ... dunno if "pander" is the right word 'cos it has the connotation of selling out - i think you do have to think about your audience and much more so if you come from a country like malaysia

lydia - interesting question re. the other varieties of english - as shirley lim herself said on saturday - in malaysia we tend to look down on people who use malaysian english as being less intelligent somehow - and there is a great deal of prejudice against it (more about this another day when i can muster all my arguments)

chet, lydia - i didn't hear that in any of the extracts she read so suggest you get hold of book and read chp 12 and see if you think she gets it right or not

Sharon - "Mr Tang's Girls", from which Sister Swing originated, is in the book I showed you last Thursday evening. I wish I'd been there to show her the book. As you said, it's not on her list; I wonder if she remembers having published it?

I'll go read "Mr Tang's Girls" to check if it has any Manglish in it.

These ppl, dunno tok what.

chet - the story is v. much anthologised inc. in the merlion and the hibiscus

How about that, Lydia and I came up with the same. Is there a standard Manglish or what ? :)

I don't know. The US is a different world. Almost everthing there is done differently from the rest of the world. I don't suppose a lot of people there can relate to the rest of the world, unless they've actually been outside the country. So the books that typically sell there are about Americans and American life. If you wanted to sell there, you'd just have to be American, otherwise how would you know ? I wouldn't expect an American who's lived in the US all his life to write about Malaysian life either. :)

I'm not saying that is exactly what she wrote, but it's similar. :P What she read out is what you'd see in American shows of how chinese americans would say it. It doesn't sound like us at all. :P I mean, since we're so use to hearing Manglish, it sounds normal to us, but when she speaks it, it's just odd.

cheeky monkey - yes would agree with what you say about it sounding more like chinese american and malaysian english ...

I don't think one could point to any style of Malaysian English (Sharon, I hear you on the linguistic objection!) as the definitive form. Singaporean English sounds awfully similar.

I've heard "she no like that" before. Heck, I think I sometimes say that!! :)

anon, I very good in Manglish one. For even more Manglish terms, refer to Lee Su Khim's Manglish : Malaysian English at its Wackiest! It's hilarious.

spot yes, there are different varieties of malaysian english for sure and singaporean english is virtually the same thing ...

Intelligent _men_ don't have it much easier. It's not nice to read a book and come across something that's manifestly illogical. Or to read and find that the author didn't really do much research when it comes to names. This happens in cheap sword & sorcery books -- these people used to have names like "Conan" and "Ghak" and my personal favourite, "Dian" (means "candle" in Malay). They used to come from places like "Cimmeria" and "Pellucidar". Now they're all Tyrannids who come from Tyrannia. Which is another reason why I don't read much these days.