The Bane of Banning

Raman also has more to say on book bannings in his latest Silverfish newsletter and has managed to get hold of a pdf of books officially banned by the Home Ministry, since it seems (in a wonderful piece of garbled typing) that they are:

...prejudicial to morality and are absolutely throughout Malaysia.

Raman also nicely defines the two kinds of banning that seem to be in operation in the country:

... one there is the official ban with the papers signed off by the Home Minister or his Deputy, then there is the other 'ban', arbitrary and unpredictable. It is almost as if there are two authorities running in parallel. The first one is quite clear-cut (even if you don't agree with it). The second is pure Kafka. Case in point: none of the books that have been proscribed by the KDN this year (according to the distributors) have been gazetted.

I add to my personal list of books I didn't know were banned (in the second sense) The Rape of Nanking: The Forgotten Holocaust of World War II by Iris Chang. (Which begs the question "why on earth?" ... oops, yes, Kafka. I forgot.)

I hadn't known previously about most of the books banned (in the first sense) last year ostensibly because they could "contribute to immorality" (although other bloggers including Politics 101 had picked up the original article from the Star). I was curious so I went to Amazon.com to read up on them :

The Big Bang by Emma Taylor and Lorelei Sharkey

The Vice Guide to Sex and Drugs and Rock and Roll by Suroosh Alvi, Gavin McInnes, Shane Smith, and Suroosh Avi

Those who reproduce the books, offer them for sale, or have them in their possession, can be jailed for three years or fined, or both.

Also worth noting on Raman's site is the police presence(albeit polite and respectful) at a talk given by Amir Mohamad at Silverfish regarding his next (yet to be banned!) film Village Radio, the sequel to The Last Communist. (More about the film here.) 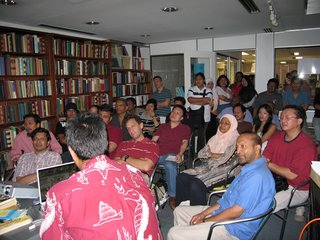 (Spot the plainclothes cop in the pic above. From Raman's slideshow on the website.)

Posted by bibliobibuli at 9:38 am

According to my friend who work at kinokuniya chinese section before, most of the books regarding homosexuality are baned! If they order them from Taiwan or China, the books are likely to be seized at the custom.

Therefore, the bookstore will not order this kind of books for their customer, if the books are seized by the custom, they have to bear the lost.

Our PDRM kept saying that they are lack of manpower to do patrol and solve crime cases...instead they have enough manpower to attend forum of who they thought as 'dissident'...Where are we going?

yes, i find it very sad and disturbing, fei. even ms d's books from amazon on self-help measures for gynae disorders got confiscated.

Just for the benefit of anyone reading -- no, we don't assault anyone whose books we don't like. The police will not lift a finger against him whether or not they don't like his books.

As for censorship, it's because people want censorship. It's sad but true. I've already done this to death in another post, so I won't repeat it here. They say they support freedom of expression, but the moment they see something they don't like, they're thinking "this shouldn't be here" instead of "I shouldn't be looking at or reading this."

Of course policemen are not human beings, they can't possibly be interested in the movie. Really.

I thought I saw Anthony Kiedes's "Scar Tissue" in KL? Or maybe I mixed KL up with Brisbane :P

How are the sex guides "prejudical to public order"? o_O

one book about incest...ew. o_O I wonder if that's supposed to be fiction or a factual guide o_O

Why is Australia's Internet Directory banned? o_O And Lady Chatterly's Lover, I've always heard that to be a classic...

there are some books that I'm surprised aren't on the list. Wasn't "Satanic Verses" on there at some point?

anon - depends if your uncle is on duty or not!