The Best Of Best of Lists

You know when year's end is just round the corner because the newspapers begin to feature their "best of" book lists.

Canada's Globe and Mail features it's recommendations for the 100 Best Books of the Year and features both Canadian and international authors.

Across the Atlantic, Erica Wagner comes up with some Christmas suggestions in the Times, while writers and critics are called upon to recommend their favourites of the year in the Guardian and in the Observer.

Closer to home, Eric Forbes is getting in on the act with his top 30 books of the year. (I don't even dare ask him how many books he's read in total!) 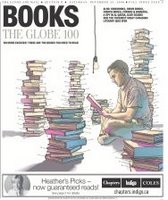 Feel you're drowing with all these recommendations? Some fiction titles crop up time and again on the lists, and I've listed them below (in no particular order):

No doubt this weekend will bring a new crop of "best of" lists in the run up to the Christmas period. I'll post links to them here.
Posted by bibliobibuli at 7:56 am

this is one of the reasons i love ur blog. the recommendations.

hey, got any list of classics, rarities and obscure stuff?

will keep listing good things, visitor as i come across them.. and thanks for the tahnks. i'm never sure if folks are going to be bored by such lists ...

How about doing your own Best of List? Then we can all comment, critique to our heart's content; and add our own best ofs. Next you come up with a list based on the top 3 of our best ofs. Then we critique it again. Then we can decide whether the elitists or the popularists reign supreme on your blog.

yes, good idea. but let's wait till just before end of year so i have a chance to read a few more books first!!