Saturday was of course the launch of the first edition of Elarti at Seksan's. I didn't know who was reading until Ruhayat X (aka Amri Ruhayat) and his sidekick Sufian Abas turned up a short while before the whole thing began, bearing the long awaited first copies.

It's a slimmer volume that Amri had wanted it to be, because he did not get the avalanche of entries he'd wanted and the financing of it was also touch and go. But now the magazine is idea made manifest, I'm sure the project will keep rolling, and the contributions for the next and the next and the next issue will come flooding in! This is the place for your writing!

The layout of the magazine is classy with lots of grainy black and white photos. And there's some very interesting content. The features and fiction are mainly in Malay (a challenge to my reading skills but one I will enjoy!). There's an interview with Nizam Zakaria by Diana Dirani, book reviews by ... Monyet di Mesin Taip (Monkey on a Typewriter - clever monkey!) an exhortation to Penulis dammit menulislah! (Write, dammit, write!) by Ruhayat X, which everyone should take to heart ... and there's much more. And then the best section of all - Zon Kreatif - with stories and poetry from Diana Dirani, Sufian Abas, Dina Zaman, Natasya, Hati Kasih, Tok Rimau, Amaruhizat, Nazri M. Annuar, Animah Kosai, and Muslin Abdul Hamid.

To launch the magazine, we had readings from ... 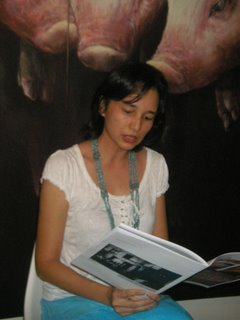 ... Animah Kosai who gave us her very funny The Idiot's Guide to Restricting Books (so now we all know what goes on behind the scenes at the KKDN!) and a very effective poem called Denial ... 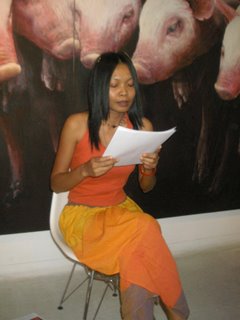 ... Muslin Abdul Hamid (back from doing the MA in Creative writing at UEA) read the first part of her short story about polygamy, That Shade of Grey, and left us with a cliffhanger! ... 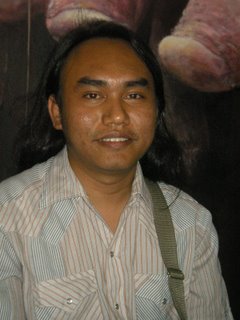 ... It was first reading for Vovin (Nazri M. Annuar) who gave us his short story Dogma (which I liked because it has cats in it, having a cat-conversation.)

Dina Zaman sadly couldn't make it, because she is recovering from surgery. Her two short short stories TV Tengkok Aku (The TV is Watching Me) and Ilusi Cinta (Illusion of Love) were read by Sharanya Mannivanan and KG, respectively. ... 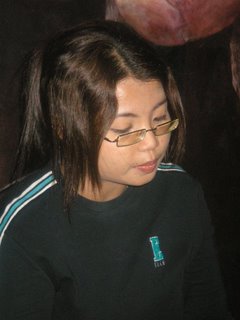 ... Here's Diana Dirani who read a piece which she said was another piece of chick-lit ... her story in the magazine is called Jin ... 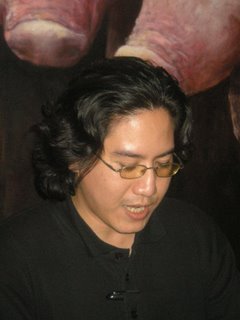 ... and Amran who writes as Amaruhizat (and is the little brother of Ruhayat X! See the resemblance?) read his short short That Last Blooming Petal.

If you're wondering why there is a great big (scary!) picture of me and the name of this blog plastered across page 5 ... it isn't that I am so terribly deperate for fame but ... well when Ruhayat X wrote that buying an advertising slot is a bit like:

... buying a plot at the Nilai Memorial Park, really, except that you're not dead yet and we're not a graveyard ...

... I decided to make a bid for immortality ... and support a cause I truly believe in.

My biggest congrats to Ruhayat X and Sufian for making the effort to get local writing out there. Congrats to the writers.

Thanks to to the great audience that turned up and bought the fifty review copies which were sold for a donation (and I was happy to see Ruhayat X with a fistful of ringgit!). Copies will soon be more widely available - check back here for details later on.

And our great thanks, as always, to Seksan and La Bodega for sponsoring the event.
Posted by bibliobibuli at 12:51 pm

congratulations to r x and sufian and everyone in the magazine. here's to more!

have to ask the man himself, ms d. i don't think he's actually started the presses rolling yet but i'm sure he ha a copy specially for you.

we really missed you. hope you will do a reading for us in jan or feb?

jan is good. feb is good. eva and vera my ovaries have been locked up. march to april, tied up.

see you after new year?

see you very soon i hope. lots of gossip. will email you.

The readings were good but this is the second time I've hear Diana read and I am not able to catch much of her words. She reads very fast like its a race to see how many words she can get out in the time. I think people who do readings should practice their delivery first so that the audience will be able to catch their meaning. Also eye contact from time to time is good. I could feel everyones attention beginning to run away from her. Her story in the magazine is good though.

Rather enjoyed animah's story but wasn't paying much attention to the other readers as 3 of my friends were bugging me to leave as we had to attend another function.

Overall the readers were good although there's room for improvement in terms of delivery and expression.(I agree with "anonymous". The audience would have appreciated more eye contact from the readers}

The magazine's cool. Me didn't manage to get one though *sob* :(

anna - that was you with your friends. hey, should have said! (ruhayat x thought you had all come for a glam magazine launch party and left when you saw it wasn't!)hope you come again another time!!

one problem with delivery is that i don't have a microphone so everyone has to strain a bit to hear. and because everyone sits and tends to look at their papers, there is very little eye contact. (i get frustrated trying to take photos of readers who don't look up)

i could follow the stories in english, but my malay isn't great especially when a piece has lots of slang and dialect. i could understand quite a lot of vovin's story about the cats, but couldn't catch much at all of diana's either. but i hope the malay speakers in the audience could.

i shall write some guidelines for readers ...

and if there is anyone who can help with a microphone + amplifier (either to supply one or to help me choose one which is idiot-proof, portable and cheap) please contact me

Would have liked to chat with Ruhayat X again, after so long. But that day still hadn't recovered from some hacking coughs. Didn't want to spread white sticky gunge, did I, instead of fluffy white Xmas?

Good luck to Ruhayat on his mag!

Congrats to Ruhayat. Not easy to come up with a magazine but he did it.

Sorry I didnt manage to make it.. thanks for the fabulous account Sharon, congrats to Amri & team and cant wait to get my hands on the issue!

I’m seeking thousand apologies for everyone. I’m not feeling well and I have a worst sore throat and fever. My voice isn't gone, but its croaky sort has. I have tried to project my voice out but I am not able to do properly. Please accept my personal apologies.


Thank you for your kind understanding.

I was there to check out the local literary scene( I WAS a snob, you see,last time me no read local books one ) and walked out, albeit hurried, with a smile.

I had meant to give you a pair of book thongs as a Christmas gift but me friends were pestering me to leave ad nauseum, so after much gesticulation on their part and after much adamance on mine, I succumbed :P

Ruhayat: Me want your cooler than cool mag. How?

A good rule of thumb for reading is, when someone says he's lousy at reading, he is. :)

leon, diana - hope you're feeling better. diana - it was brave of your to read with a bad throat.

for sure we need that microphone - i really think it would help everyone project themselves without too much pain. please come to my rescue somebody and give me some advice!!! (or maybe volunteer to be our sound person?)

anna - hope to meet you next time and will endeavour to have once again have some exciting readers.

sufian - it isn't at all an easy thing, getting up there to read your work. hey, how come i didn't get a pic of either you or ruhayat??

Next time you should just ask ruhayat to read, after all he is an international film star (who acted in an award winning art movie).

aiyoh - i di'n' know ... i woulda treated the guy with reverence is i hadda! (yet to see the film)

car broke down that morning, had to replace the battery, but the reading was the highlight of my day. had a nice time. thanks for the drinks and the magazine.

Thanks so much for the continuing support, Sharon.

Dina/Anna/et al: The magazine should be out next week and available at Silverfishbooks. Am negotiating a few other places, including university bookstores. Hopefully no copies will be "misplaced" by incompetent distributors masquerading as wannabe publisher dude this time around.

Will let you know when stocks have been sent out.

Anyone know how I can get in touch with Dr Faridah Manaf, by any chance?

burhan - very nice to have met you at last. glad you enjoyed yourself.

will email you her address, ruhayat

*egad* I look fat, and to think of it, I was wearing black! Time to draw out the dusty weight lost new year resolution again, LoL

Elarti (and the reading) was a debut for me.

After the reading I met Datuk Shan who said he liked my piece, how stoked was that?! I should have called my mother!

Thanks a many to Elarti Magazine.