The Carpet Bombing of Readings from Readings 2 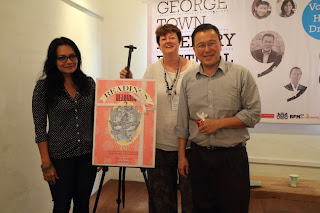 It's quite distressing that our our second book   has been hit heavily by negative remarks and 1-star reviews on Amazon.

As you might know, the book Readings from Readings 2: New Writing from Malaysia, Singapore and Beyond edited by myself and Bernice Chauly was published in November last year and launched (with the help of the very supportive Tan Twan Eng no less!) at the Georgetown Literary Festival in Penang. The book is a collection of writing by Malaysian writers and expat writers living in Malaysia and grew out of the monthly literary event I organise.

My friend, publisher Amir Muhammad, helped me to get it onto Amazon.com via his account. It was a great feeling being able to make Malaysian writing visible on an international platform. I didn’t expect to sell hundreds of copies – really this was a symbolic act, as the main market for the book is obviously the local one and it is doing well in the bookshops here.

The first negative reviews hit in the space of just a day or two over New Year, and there were more a few weeks later. The lies have been many and varied: the book was poorly edited and proofread (you have only to hold it in your hands and flick through the pages to see how wrong that is); that it fell apart; that the line spacing was wrong; that every other word was an obscenity (there's not even one swear word); that I was some kind of a Muslim fundamentalist; that I was not sympathetic about the Boston bombing, (hello, this book came out last year!); that I was some kind of bleeding-hearts liberal pursing an agenda (yeah I have an agenda all right - to do something for Malaysian writers). And so on and so on, the creativity of my particular troll never letting up.

Incidentally, only 6 books have been sold on Amazon so far and the e-book isn't out yet, so of course these "reviewers" have not even seen a copy of the book.

Initially, I had no idea where the reviews were coming from and why they were being posted. I was very shaken by the attack – and worse, felt that somehow I had let my writers down. I contacted Amazon’s Customer Service department and they took a look at the page but responded that the reviews did not contravene the Terms of Service so they could do nothing.

A few days ago I added a couple of quotes from local newspapers and perhaps it was this that has triggered the latest spate of comments.

I tried to track down some of the Amazon “reviewers”. Most of them are the usual “gun-for-hire”, posting 5 star ratings while saying nothing much about the book. In most cases there was so little information in their profiles that they were untraceable, but in 3 cases I managed to find out who they were via Google.

The first reviewer I tracked went by the nick Funmom91 (alias Victoria Heckstall). She turned out to be a single mother in the US who makes most of her money from writing for-pay blog posts and reviews (as well as a little prostitution on the side judging from the police reports I unearthed!). We had a brief conversation on Twitter and minutes after, she took her "review" down. 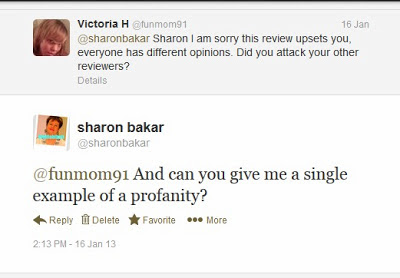 Another “review” was posted by a Sri Lankan who goes by the nick Dilmaxa and who was solicited via Fiverr.com. When I threatened him with legal action he admitted that he had accepted payment for a 1-star review and took it down (screenshot of his "confession" below).

The third was from a woman called Brandi Thornsberry, also in the US – her email “confession” is reproduced below:

Let me Start off by Saying I am sorry. Yes I was paid for this review. It was not my own words. I was paid to simply cut and paste this review. I didn't like it one bit but since I didn't clarify I wouldn't post negative reviews (which has now been changed) I had no choice but to follow it. I have since deleted the review. I will deal with the consequences on my end, that's my fault.

I am a writer myself, I do know how much time and effort goes into it. I am sorry I treated another writer like this, specially when it wasn't honest. I had placed that gig on my job in hopes to help people promote their own products. That was the first time I ever received a request of that nature.

I understand the damage has been done and their it not much that I can do to change your feeling about me, just know that I am actually an honest person, I am a freelance writer and I will not EVER take a job of that nature again. I have edited my job and put in bold letters that I will not place negative reviews again.

If there is anything I can do to make it up to you, please let me know. Thank you for hearing me out and I am sorry if I ruined your day over someone acting petty and be following in line.

In a further email conversation with her, she told me that she didn’t know who had commissioned the review as she gets the review work from a middle man. I am not sure if this is true.

I am angry at Amazon which does not seem to be supporting the authors and publishers who use its services. The use of fake reviews is so widespread that the whole system is rotten. I knew about fake 5-star reviews, but I had no idea that 1-star reviews could also be bought.

Note that one point that both Brandi and Dilmaxa make - they were given the text of the reviews! There is one single voice behind all the viciousness. One person paying dozens of people. Spending a great deal of money (even if the fee is just US$5 a pop) in order to distress and defame. I am sure this is a personal vendetta – against me, and perhaps also against one particular writer in the book who has been singled out for abuse. (It looks as if the troll knows him personally.)  This individual might have had his/her work was rejected when I made my selection for the book. He/she also knows how to purchase reviews quickly and easily without incriminating himself/herself. It could be that they acquired this familiarity by buying "shills" (5-star reviews) from sites like Fiverr.com.And it's likely that their behavior elsewhere has been erratic and abusive.

How much hatred must that individual have inside them? And to be this obsessive - aren't they mentally ill?

I have written a second report for Amazon, and am waiting for their reply. I am weighing my options as far as legal action is concerned. (I have access to the lawyer downstairs who has plenty of advice to give!)

But what disturbs me most about this attack is that it is possible at all.

It's just too easy for folks who want to make a little money online to set themselves up as sock-puppets with multiple Amazon accounts and bogus identities.

Almost nothing has been written online about this phenomena referred to as "carpet-bombing" in this Forbes article, and more than anything I would like to think that by making my experience public I am in a small way encouraging this huge company (that clearly aims to take over every aspect of our reading life) to become more accountable and to change its policy re fake reviews.

The last rash of 1-star reviews have been taken down by Amazon.com.  Am very grateful for that.  Will still be pushing for more of the reviews to be removed.

Interesting footnote. I noticed the other day that there was a rash of 1-star reviews on the first book on GoodReads.  All of them were posted on the same day (March 13), within minutes of each other, under different names, but they were written in the same style as the Amazon reviews.  The location for all the reviews was given as exactly the same area of  Auckland, which may finally have pinpointed our troll!  I know exactly who it is now, but having the proof in my hand so I can take legal action is a tiny bit trickier - though I'm working on it.

More 1-star reviews were added to Amazon.com and later got cleaned off.  Amazon seem to now be taking notice.  Maybe the Forbes review article and the comments had an effect?

Many more fake accounts opened on GoodReads, which makes it oh too easy to post multiple 1-star reviews.  How many hours did this poor idiot waste opening them and making them look credible?   (They get cleaned off, then he wastes a few more hours putting more up. I'm sure this will keep going on.)

I know who who my bully is (because he doesn't even bother to cover his tracks anymore, now sending hate-mail directly to my inbox).  The writing and publishing community and journalists in Malaysia know who it is.    I have his address and I have a lawyer in Auckland who is happy to move ahead with the case.

Because the person you are hurting most is yourself, John Ling ... Please get yourself some psychiatric help before all that hatred implodes.

Your experience here has really opened my eyes. I have in the past placed a lot of value on Amazon ratings/reviews but not anymore. It is despicable that someone would go to those lengths to execute a personal vendetta against someone. People are sick. Keep doing what you're doing Sharon! You have my eternal support.

An excellent summation of this situation, Sharon. I had no idea whatsoever that one could even purchase negative review placement--OR that positive review 'carpet bombing' was so common! Clearly, it's a well-edited and worthy read...else why go to all the trouble to discredit it?? I hope that Amazon will listen and know that more people will become aware by your efforts.

Good Lord ... I only review on Goodreads (books I totally love/loath) and you don't see this kind of wackiness.

Dear Sharon,
I knew that many reviews on Amazon are falsely made and not honest but I have never heard that one can also buy bad reviews!keep up the good work and best of luck always

Wow! I totally did not see that coming at all! Good efforts on your side Sharon! I wouldn't take my personal attack on Amazon, but I definitely have my own different point of view now.

Wow! I'm being hit by this now (as Storm Chase) Totally amazing what some people do.

Amazon has way to many five star reviews also. Many are from people given books by publicists.

This is utterly fascinating, first of all I had no idea such a thing even exists. Paying others to post negative reviews; I am enlightened. This seems to be a legit publicity tool and I definitely see how it could work, especially if bigger companies were to pay people to shame books by smaller publishers. I mean, I certainly see Penguin starting a facility devoted to this purpose. The bastards. Secondly, I urge you to inspect carefully the evidence you have, and find out if it's a widespread occurence or if this kind of thing has only been limited to your book. Interesting that you managed to pinpoint the location of the reviews though. And if indeed you now know it is, please know that I personally am dying to know more about this and you should write about it sometime soon.