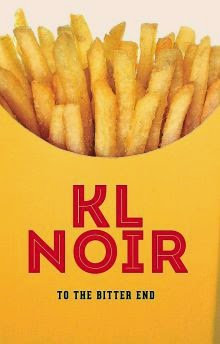 Inventive insights into the city

By SHARON BAKAR
An enjoyable collection of short stories that provide a different view of Kuala Lumpur.
Local publisher Fixi’s popular KL Noir series is completed this month with the release of this fourth and final volume. In Yellow, we are promised stories that are “sick and twisted”, and a journey through “the dark underbelly of Kuala Lumpur”. And this is pretty much what we get.
The nature of the genre means that we know that things are always going to end badly, but we are grateful to writers who take the trouble to create convincing characters and believable scenarios along the way. The best stories in the collection also show us the city we think we know in a new light, and reflect the cultural zeitgeist.
When seemingly ordinary folk turn to violent crime in fiction, it takes skill on the part of the writer to make the transformation convincing. Two stories in particular manage this challenge very well.
Selvi in Subashini Navaratanam’s Girl Power feels rage and frustration at the lot of women in traditional Tamil society, and fights against social restriction. She comes to increasingly identify with the dark goddess Kali after accidentally glimpsing a statue during a temple visit as a child. This is an intelligent and heartfelt piece with a strong narrative voice and the journey into obsession is entirely credible.
In Sharmilla Ganesan’s French Fries For Aunty Kamalan, a devout Hindu discovers from a website that her favourite French fries from a fast-food restaurant chain are actually fried in beef-fat to make them more delicious. This is of course completely against the tenets of her faith. We really feel for Kamalan as she is torn between desire for the forbidden food, haunted by the jingles and the TV ads, and her self-disgust. The story also nicely parallels the spate of scare stories about products on the market containing “porcine” DNA.
Several of the stories play with the idea of the duality of man, with good and evil co-existing within an individual. Zufar Ismail’s cop on the trail of a serial killer in Breaking Point makes a terrifying discovery about himself, and the voice of the wearied cop is particularly convincing. Catalina Rebuyan’s The Kill Wishis an almost metaphysical tale of a hired assassin who comes across a victim who is so completely good that he must rethink his mission.
Appearances, as we learn, are deceptive. An old man suffering from dementia in a care home must be harmless, right? But when in Chin Ai May’s Never Forget A Face, a retired cop thinks he recognises an old adversary among the other inmates, his instinct for self-preservation takes over. And the contrast between innocence and evil is nowhere stronger than in Trap by Choong Jay Vee, a chilling tale of a cosplayer attending an anime convention at KLCC dressed as Lolita.
As we might expect in a collection of this nature, there’s plenty of blood and gore. The opening of Sek Han Foo’s The Disgraced is stomach-churningly violent, while Happy Family by Claudia Skyler Foong ends up with almost as many corpses as a Shakespearian tragedy.
But there are more understated pieces too, the most powerful of which is Paul Gnanaselvam’s The Ride. A poor boy from one of the roughest neighbourhoods feels a need to keep up appearances in front of his wealthier classmates, and is overjoyed when one offers him a daily lift in his chauffeured car. There’s real horror in the implied ending, which is surely drawn from newspaper accounts of unexplained deaths in the lift shafts of the notorious San Peng flats.
Sukhbir Cheema’s story The Lost Pilgrim also uses setting very well and gets across the difficulty of creating any sense of connection in the city.
The one piece of reportage in the book is an account by Martin Vengadesan of the rise of the legendary gang leader Botak Chin in the 1970s. Nicknamed “the Robin Hood of Sentul”, Chin was both charismatic and wily, and his sharing of the spoils with the wider community ensured his survival for a long time. It’s a shame that the piece feels a lot flatter than the fictional efforts that surround it.
However, while there is much good writing in the book, there are still plenty of rough edges. There are the problems with the nuts and bolts of short story construction that seem to dog most local collections; stories start too slowly and not far enough in, scene transitions are not smooth in places, and back story often seems dropped in whereas clues should have been planted much earlier.
Sometimes the flaws co-exist with the strengths. Timothy Nakayama’s Ambrosia takes us into the sharply realised world of the celebrity chef, but the darker elements in the story just don’t convince. Similarly, inContrail, Leroy Luar creates an atmospheric setting for his story of urban exploration set in the old budget terminal, but the encounter with the protagonist’s ex-girlfriend and the back story about their relationship is clumsily drawn.
Overall, though, this is a very enjoyable collection, and the sheer inventiveness of the writers ensure that the tales never feel derivative or predictable.
Posted by bibliobibuli at 8:52 pm