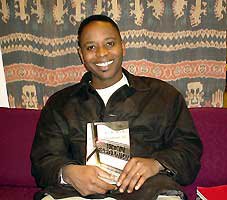 A moving memoir in today's Observer by Ken Wiwa.

Ken Wiwa was one of the "stars" of last year's KL Literary festival arriving on these shores courtesy of the Canadian High Commission. Wiwa, of course, is the son of Nigerian writer Ken Saro Wiwa, who was imprisoned, tortured and executed ten years ago for leading protests on behalf of the Ogoni people who were being screwed by oil giant Shell in the Niger delta.

I'd expected Wiwa's book In the Shadow of a Saint it to be an extended song of praise for the great man his father undoubtedly was. It turned out to be an extremely moving and honest account of a sometimes very fraught father-son relationship, and a wider exploration of the legacy of the pain and confusion a political martyr can bequeath his children. (You can listen to an interview with Wiwa about the book and his father's life here.)

Felt very sad reading the Guardian piece that this is the first I've heard about plans to celebrate the 10th anniversary of Saro Wiwa's execution with performance and readings around the world. Couldn't we also mark the anniversary here somehow?
Posted by bibliobibuli at 9:47 am