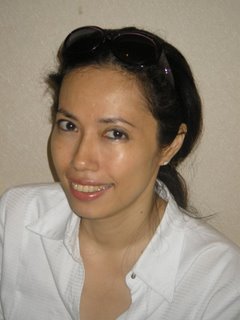 Dina Zaman suggested the idea of a blog interview the other day to tie in with her reading this afternoon at Borders. Since we'd arranged to meet yesterday morning to talk over a couple of her stories, it seemed like the right opportunity.

After all, if as Raman suggests, the local newspapers aren't featuring much book news, doesn't a self-styled litblogger have a duty to scoop an exclusive?

I've enjoyed Dina's writing for some time. The first stories I came across were published in a little volume called Night & Day (Rhino Press) and I felt rush of joy as I read them. Not only did the writing slip down easily, she was the first writer I'd come across who'd manged to get down to the page a Malaysia I recognised. (Heck, She even captured characters I had seen myself on the street!)

Dina told me that she had spent hours observing people while waiting for her bus after work (she was a PR executive for Central Market or wandering Petaling Street. The stories were there and waiting for her.

Dina says that she's always felt a sense of rootlessness, of being in the outside of things. Her father was a diplomat and the family had to continually move between postings so that she always felt like the new kid in town.

Born in 1969, she spent her early years in Tokyo and grew up speaking Japanese with "just a smattering of English, so that no-one knew what to do with me". One of her strongest memories from these early years was her mum making her a pair of wings because she fancied being a butterfly. The family later moved to the former Soviet Union where she attended an Indonesian school and has vivid memories of being bullied.

Because of the disruptions to her education, Dina moved back to live with her grandparents in rural Terrenganu and fell in love with kampong life. She was also homeschooled for a while - an experiment she describes as not being too successful, before the prestigious Sekolah Tungku Kurshiah and then Convent Bukit Nanas.

She discovered that writing was her vocation whilst on a degree course in Mass Communication at Western Michigan University. Forced to find a subsidiary subject, she chose creative writing initially because it seemed an easy option, but she found she had a flair for it, and Philippa, one of the pieces she wrote while there, found its way into Skoob Pacifica Anthology Volume 2 (1994) published by Thor Kah Hoong of Skoob Books.

A spell in PR followed, but Dina began to submit pieces to the New Straits Times, and before long she was offered her own column by editors Rose Ismail and Fatimah Abu Bakar. Christened Dina's Dalca (named after a kind of lentil curry which contains a whole mixture of ingredients), she soon had a large number of followers intrigued by the frankness of the writing, delighted by the humour. She also had pieces accepted by Men's Review where she describes editors Kam Raslan and Sheryl Stoddard as supportive "but tough".

She runs through the names which were most prominent in the writing scene in the early '90's, a time when the writing scene seemed so much more exciting, ("There were so few of us in the KL writing scene in those days, so we all knew each other and were working towards a common goal") but laments that of all those promising young voices only Bernice Chauly and Jit Murad are still writing.

Dina's blog The Gongkapas Times (written she says "to let off steam") carried on from where Dalca left off, and was one of the most popular destinations in the Malaysian blogosphere. There was a collective howl of sorrow when the blog suddenly got taken down by a hacker and months of entries were completely lost. (The good news though, is that it's back.)

She did an MA in Creative Writing in Lancaster, choosing it over SOAS because of London prices and a desire to be in the countryside and "live out farm girl fantasies". And there was the Lake District close at hand of course, with its writerly associations with Beatrice Potter and William Wordsworth.

She says that she didn't really feel stretched by the course where she felt she was repeating stuff she had done for her first degree. But homesicknesses was assuaged by writing about kampong life, and she finished the draft of a collection of short stories set in rural Malaysia. One of the stories, And She Became an Angel, was shortlisted for the Ian St. James Awards. (The collection The Road to Elvis and Other Stories will be published later this year.)

Her year in Britain also gave Dina the opportunity to travel around Britain and talk to fellow Muslims, and the idea for a new column about Islam was formed.

After a spell working for Marie Claire, she became editor of Rentakini, the magazine section of the controversial online newspaper, Malaysiakini. Her I Am Muslim column was born and Dina became a powerful female voice for moderate Islam in the country.

If Dina has become something of a public figure, she is at heart is a very private person who feels uneasy when her personal space is invaded. Her writing has attracted legions of fans, including some who don't respect her boundaries. "When you're very open and write about your life, people feel they know you."

She's also had her fair share of detractors over the years, she says, including those who ask "What is this Malay girl trying to prove?" and her early fiction has been criticised for being "too sexual, too angry". There's less anger, a great deal more humour in the new collection, but the stories are still bound to stir some controversy.

And once The Road to Elvis is Published? Dina's colourful stories about the larger than life characters in her extended family can keep me enthralled for hours, and I'd love to see her write a dynastic novel about her Terengganu roots ala Allende or Marquez.

Curiosity stirred? Well then, come over and hear her read some of her writing this afternoon at Borders! The fun begins at 3 p.m.
Posted by bibliobibuli at 6:10 pm

look at those CHEEKS. i look like a chipmunk. oh no, i look like that frog. what's that frog called - the one whose cheeks grow bigger and bigger until they explode?

how to read lah. i got my you know what today. no wonder i was so damned grumpy yesterday.

hihi, this is brilliant. you have no idea how happy-fying it is to see "it's back". it's like a part of me that was missing has returned!

Thanks so much for the write up on Dina Zaman. Living in Canada as I do, I hadn't heard of her. I so look forward to exploring her blog - sounds very interesting!

ms d - since you wouldn't let me use your official author photo, you deserve to look like a chipmunk

lotus reads - nice to meet you from across the world ... i dropped by your book blog and enjoyed it

Way to go, Dina. I finally get to see the pretty face behind Dina's Dalca and Gongkapas Times. Glad to hear it's back.

Sob. Wild horses wouldnt have stopped me from going to the reading had I not been interstate over the weekend.

"what's that frog called - the one whose cheeks grow bigger and bigger until they explode?"

Don't think there ever was a name in that fable.

Is there going to be a launch for the book? Who'll be launching it? How many stories will there be in that collection? I sound like a reporter.

So would having someone hack your site means you've achieved stardom ? :P

All the best, Dina.

"So would having someone hack your site means you've achieved stardom ? :P"

Very possibly I guess. Or at least attempted to. Fame is overrated anyway.

clarissa - i am more of whipcracker than an editor at the moment! but when it's all ready for a launch there will be fireworks from KLCC and a parade of elephants on bukit bintang

will of course keep you posted

haiyo. you're bginning to frighten me.

Ya sharon. Remember to put up a big announcements in mailing list. I only read blogs in spurts. :D

Dina, nice to see that you've got back your blog back. I used to read your old gongkapas blog...think maybe i should post this comment to you at your blog, the next time. That short story you read at Borders...think I've read that in SARE a year back. Have you expanded in it since?


As with being famous, you can be famous enough in the warped mind of the person who hacked it..or he/she is just going on a spree.

where can i get a copy of SARE? i never received a copy! thanks.

"fame IS overrated. and i'm not famous!"

This reminded me of Obelix saying "There're not two fat guys here, only one.. and he's not fat !" :)

"laments that of all those promising young voices only Bernice Chauly and Jit Murad are still writing."

And Bernice is only writing as a sort of sideline now. Jit Murad is into performing arts isn't he ?

_She's_ a private person ? I don't even dare have my name on here, let alone my picture :)

Never mind those cheeks.. how did you get your _teeth_ to look like that ?

hye dina..
just wanna ask..
to what extent do u think Malaysian Literature in English(MLIE) has provided a space for Malaysian writers to explore sensitive issues such as gender and sexuality, and race relations.
can u reply me...to my email..sheila_snickers87@hotmail.com..thanx..

Yea i heard from a friend about the talk too. It's titled "About writing in Malaysia".

zue - please see my entry on the talk here