A Clutch of Bogus Memoirs

I'm writing a piece about truth and the memoir and if you haven't already been bored to death by the Oprah/Frey story, you might like to read the original expose piece, A Million Little Lies, on the Smoking Gun website.

(If you decide that this whole issue is being taken way too seriously, please do go read the very funny spoof by Kenneth J. Harvey on the Times website!)

Anyway - I decided to see if I could find other memoirs which have pulled the wool over the eyes of readers (and publishers) and found, surprise surprise, that Frey is certainly not the first nor the worst offender.

First there's the case of Nasdijj. Purportedly of Navajo descent, Nasdijj wrote an ode to his adopted son who died of fetal alchohol syndrome. The piece, published in Esquire magazine was a finalist for a National Magazine Award and won him a contract for a full-length memoir. He went on to write two more volumes of memoir about his lifetime of suffering.

Except that Nasdijj was no more Native American than my left elbow, and his stories were largely lifted from accounts by other writers. The LA Times blew the whistle and outed Nasdijj as Tim Barrus a white-writer of gay erotica. 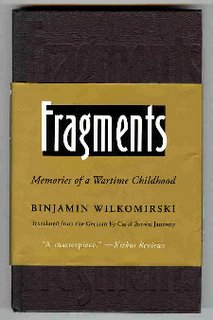 Then there's Binjamin Wilkomirski. His prize-winning memoir Fragments: Memories of a Wartime Childhood, was hailed as a classic and earned him comparisons to Elie Wiesel, Primo Levi and Anne Frank.

Except that he never was the holocaust survivor he claimed to be.

Author Daniel Ganzfried researched the case and discovered that legal documents and school records contradict the author's claims. Wilkomirski was outed in an article in Swiss publication, Weltwoche in 1998, and revealed to be a Swiss protestant called Bruno Grosjean. Unlike Barrus though, he appeared to be genuinely convinced of the truth of his story. 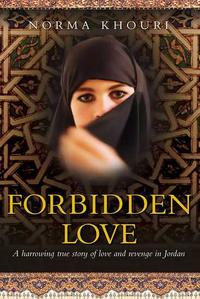 Another memoir fraud was unmasked in Australia's Sydney Morning Herald with the aid of Jordanian journalist and woman's rights activist Rana Husseini .

In her memoir Forbidden Love, Norma Khouri told the "true" story of the murder of a young Jordanian woman by her father because she dared to date a Christian man . The book was a great hit and sold more than 250,000 globally. In Australia, where the author has been granted asylum, it was voted one of the country's 100 favorite books of all time.

Her story was exposed as a fraud and as the Lebanese Times reports:

The scandal was a setback for advocates of women's rights in Jordan and provided a disturbing case study of how lies and distortions can masquerade as "fact" in Western discussions of the Arab world and Islam.

and the book was withdrawn from sale.

"Ten Thousand Sorrows" by Elizabeth Kim. Supposed memoir that seems full of obvious fabrications and huge discrepancies, contains no dates, and (some say) exploits and demonizes Korea and its culture. The real sorrow is that it isn't even the kind of book that's readable for pure literary merit -- it's so mired in obvious lies and self-pity and so poorly written that even if it were promoted as a novel and not a memoir, it just wouldn't work. Just my opinion, though.

What a fascinating piece of research. Everybody seems to be talking about that Times articles. Fantastic piece of satire isn't it? :)

sharanya - i hadn't heard of elizabeth kim aka elizabeth chambers but it sounds as if she manufactures her own version of the truth ... and i guess that the only reason that these folks are writing memoir is becasue they can't cut it as fiction writers

walker - thanks! ... and i laughed so much at the times article ... but it's exactly what we needed post-frey

Memoirs are easy money spinners. Its the easiest to lie about too. All you need is some grand story about something that happened (or not) in your life, write it, make it extra grand and you have a bestseller. Sad, but true.

The Times story had me rolling on the floor and the time is half past midnight! LOL

"The scandal was a setback for advocates of women's rights in Jordan and provided a disturbing case study of how lies and distortions can masquerade as "fact" in Western discussions of the Arab world ..."

such a case study has already been done by Edward Said in his famous book, Orientalism.

may be a bit off topic....but i can never understand why people take oprah seriously...that little oprah sticker on any books give a totally opposite effect on me...i automatically feel distaste and will not have any interest in reading any book which oprah recommends...

Oh I think that's a bit unfair greenbottle. I've been torn over Carol Greever's "My Husband Is Gay: A Woman's Guide to Surviving the Crisis" and Kim Izzo's "The Fabulous Girl's Guide to Decorum" for some time now.

Wonder what happens to the royalties. Most of them must sell pretty well.

When I was in Oz-Land during my Uni days,there was this book called "The Hand That Signed The Paper" about the plight of Ukrainian refugees(or so I think me memory's a tad hazy) and the author was also supposedly of Ukrainian descent by the name of Helen Demidenko.Book was critically acclaimed and ol' Helen was given the Royal Treatment by leading members of that society.Turns out Helen Demidenko was actually Helen Darville and about as Ukrainian as Vegemite.And on top of it,certain passages of the book were found to have been ripped off a Thomas Kenneally novel.Needless to say,Ms.Demidenko- Darville was soundly tarred with the fraudster's brush and banished into ignominy and away,one hopes,from any self respecting Ukrainian!Makes you wonder why these people don't just write a work of fiction straight off the bat,they're so bloody good at making stuff up!

anon - they do sell well ...the royalties would end up in the authors and publishers pockets ... where else?

krishna - "about as Ukrainian as Vegemite" ... you do have the perfect turn of phrase for all occasions! this is a great example to add to the list

i think that these folks don't write fictions straightout because it's easier to sell a supposedly true story if the content is dramatic enough and has shock-horror value ... the market for ficition is flooded and let's face it , good fiction is hard to write ...