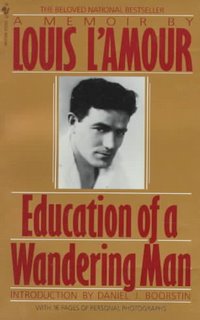 I wrote an entry some time back about the need for writers to read.

Well, the last time I was dusting my books, I came across a slim paperback I had completely forgotten about and - to my shame - not got round to reading. (Such pleasant surprises can happen when books take over a large part of your house! The downside is the cleaning doesn't get finished.)

Education of a Wandering Man is the autobigraphy of Louis L'Amour - a prolific writer of westerns. This is a genre that I have never developed a taste for (really we're talking books for the boys here) and have never read a single one apart from Larry McMurtry's Lonesome Dove - and that under protest.

But I'm always fascinated by what makes a writer - any writer tick, so dipped into it. It's a rather rambling read, documenting L'Amour's many adventures - his travels in the US and Far East, his time as a seaman, cattle skinner, mine guard, hobo. All material that found it's way into the stories he wrote. (If you want to be a writer, live a life, hey?) He wrote mainly (out of economic necessity) what is termed "pulp fiction" for the entertainment of the masses but is still regarded as the best writer of "frontier fiction".

But what fascinated me most is L'Amour's account of his other journey - through books. His reading lists from 1930 onwards are included in an appendix at the back of the book. And I just marvel at how voraciously and widely L'Amour read. Here's his list for 1930: 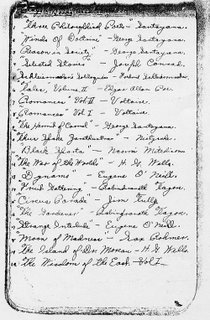 1. Three Philosophical Poets by Santayana
2. Winds of Doctrine by George Santayana
3. Reason in Society by George Santayana
4. Selected Stories by Joseph Conrad
5. Schleimacher's Soliloquies by Frederick Schleimacher
6. Tales, Volume II by Edgar Allan Poe
7. Romances, Volume II by Voltaire
8. Romances, Volume I by Voltaire
9. The Hermit of Carmel by George Santayana
10. Thus Sparta Zarathustra by Nietzsche
11. Black Sparta by Naomi Mitchison
12. The War of the Worlds by H.G. Wells
13. Dynamo by Eugene O'Neill
14. Fruit Gathering by Rabindranath Tagore
15. Circus Parade by Jim Tully
16. The Gardener by Rabindranath Tagore
17. Strange Interlude by Eugene O'Neill
18. Moon of Madness by Sax Rohmer
19. The Island of Dr. Moreau by H.G. Wells
20. The Wisdom of the East, Vol I
21. In Search of a Villain by Robert Gose-Brown
22. Master Mind of Mars by Edgar Rice Burroughs
23. Poems by Henry Van Dyke
24. The Hairy Ape by Eugene O'Neill
25. Mountain City by Upton Sinclair
26. The Dreamy Kid by Eugene O'Neill
27. Terror Keep by Edgar Wallace
28. The Emperor Jones by Eugene O'Neill
29. The Author's Mind by Lawrence Conrad
30. Marco Millions by Eugene O'Neill
31. Anna Christie by Eugene O'Neill
32. The Case of Sergeant Grischa by Arnold Zweig
33. Essays by Ralph Waldo Emerson
34. The Long Voyage Home by Eugene O'Neill
35. The Moon of the Caribbean by Eugene O'Neill
36. Bound East For Cardiff by Eugene O'Neill
37. In the Zone by Eugene O'Neill
38. The Great God Brown by Eugene O'Neill
39. The Crime in the Crypt by Carolyn Wells
40. The Fountain by Eugene O'Neill
41. Bird in Hand by John Drinkwater
42. The Science of Hypnotism by Dr. L.E. Young
43. Fu Manchu's Daughter by Sax Rohmer
44. Jew Suss by Ashley Dukes
45. Memories and Studies by William James
46. Jorgenson by Tristan Tupper
47. Lazarus Laughed by Eugene O'Neill
48. The Dance of the Machines by Edward J. O'Brien
49. The War In the Air by H.G. Wells
50. Beyond the Horizon by Eugene O'Neill
51. Studies in Pessimism by Arthur Schopenhauer
52. Why We Behave Like Human Beings by George Dorsey
53. Bitter Biance by C. Hartley Grattan
54. The Rope by Eugene O'Neill
55. Tales of Unrest by Joseph Conrad
56. Four Faces of Siva by Robert J. Carey
57. See Naples and Die by Elmer Rice
58. The Fifteen Cells by Stuart Martin
59. Gold by Eugene O'Neill
60. Men and Machines by Stuart Chase
61. Odyssey by Homer
62. The Man of Destiny by G. Bernard Shaw
63. The Journey's End by R.C. Shariff
64. Erewhon by Samuel Butler
65. Ecce Homo by Friedrick Nietzsche
66. Ghosts by Hendrick Ibsen
67. The Tavern Knight by Rafael Sabatini
68. The Birth of Tragedy by Friedrick Nietzsche
69. Marriage and Morals by Bertrand Russell
70. Liberty Under the Soviets by Roger N. Baldwin
71. All Quiet on The Western Front by Erich Remarque
72. Cheri by Colette 73. Condemned by Blair Niles
74. Mystery of Lynden Sands by J. J. Connington
75. Mirope by Voltaire 76. Bajaget by Jean Racine
77. Don Juan by Moliere
78. The World Set Free by H.G. Wells
79. Criminology by Wellington Scott
80. The Art of Life by Havelock Ellis
81. Athahie by Jean Racine
82. All God's Children Got Wings by Eugene O'Neill
83. Stendahl by Paul Hazard
84. Poems and Prose Poems by Charles Baudelaine
85. The Winds of the World by Talbot Mundy
86. Plays by Anton Tchekoff
87. Lilian by Franz Molnar
88. Doctor Faustus by Christopher Marlowe
89. Rattling the Cup on Chicago Crime by Edward D. Sullivan
90. A Woman Of No Importance by Oscar Wilde
91. The Mystic Will by Charles G. Leland
92. Trader Horn by A. A. Horn and E. Levine
93. The Fan by Carlo Goldoni
94. The World of William Chissold by H.G. Wells
95. Mandragola by Niccolo Machiavelli
96. Criminology by Horace Wyndham
97. Many Lands of the South Seas by Nordhoff and Hall
98. Man and Superman by G. Bernard Shaw
99. An Ideal Husband by Oscar Wilde
100. Egotisms in German Philosophy by George Santayana
101. Laws of Mental Medicine by Thomas J. Hadson
102. Mental Fascination by William W. Atkinson
103. Mind Energy by Henri Bergson
104 Repressed Emotions by Isador M. Coriat, M.D.
105. The Horla and Other Stories by Guy DeMaupassant
106 What Is Civilization? by Maurice Masterlinck and others
107. The Jungle by Upton Sinclair
108. Philosophy by Bertrand Russell
109. The Power Within Us by Charles Baudouin
110. The Will to Power by Friedrick Nietzsche
111. Tantalous by H.C.S. Schiller, M.A.D. Sc.
112. The Psychology of Insanity by Bernard Hart, M.D.
113. The Meaning of Dreams by Isador Coriat, M.D.
114. The New Arabian Nights by Robert L. Stevenson
115. The Mind at Mischief by William S. Sadler, M.D.

You look at someone's life-reading and you look at the furniture of their minds.

I took the list from the Louis L'Amour's Lost Treasures website which has plans to put up his lists for all 30 years for subscribers. This project really looks like a labour of love.
Posted by bibliobibuli at 7:59 am

Hey! That's one of my favourite books. I forget what year it was that I bought the book, but it was a long time ago for sure. Actually, the cover was the same as the one you've got. I really enjoyed reading about L'Amour's real and literary adventures. He sure got around.

I agree: you MUST READ what you are attracted to BUT also what goes against your taste. Unless, you are a specialist, a technician of some sort. Writing is an art, and as any art, needs constant exposure 'aux quatre vents'. To segment, is to stiffle the imagination. I understand that this exercice requires more of a open heart than a brain capacity. An intellectual cannot alone produce a work of art. A treaty maybe not a good novel.

jordan - yes, my links ... am sorry and must update them ... i have a lot of new sites to link to and some not so great ones or dead ones to replace

but at the moment life is so pressured i can't breathe with my classes ...

I think life is difficult enough without having to think about ox quarters venting.

I would love to read Thus Sparta Zarathustra... What, after spaking and being generally ignored, he went to Sparta?